In the second part of this series prepared from a selection of advice from electronic keyboard specialists, this article explores the new features of the Keyboard Exercise at Grade 2. In this, we meet chord IV, the remaining primary chord, and explore the common chord progressions with chords I, IV and V, how to improvise with these three chords, and  how these link to pieces in the repertoire books at the foundation grades. Finally, we introduce 7th chords, which can be used to add texture and variety.  All the suggested activities are available as a downloadable student handout.

In the first part of this series, we explored performing pieces in Initial and Grade 1 using chords I and V only. Did you notice that some pieces sounded like they needed to use a different chord?  If you tried to play Wild Mountain Thyme at Grade 1 for instance, you’d have found many of the notes would have seemed to ‘disagree’ or clash, giving an unsettled feel.

This is where chord IV − our remaining primary chord − comes into play.

In the first part of this series, we met the keys of C major, G major and D minor. Here are chords I, IV and V in those keys:

The student handout shows how to invert them to make them easier to play.

A good way to get a feel for chord IV is to play a simple melody that can be harmonised with just chords I and IV. Here is an example in C major:

Listen to the 1960s song ‘Do-Wah-Diddy-Diddy’ by Manfred Mann, you’ll find that the tune works over these chords too.

Let’s now go back and try some of these early grade pieces and see how chord IV fits. At Initial, Little Brown Jug is a good example to start with, and a further C major example can be found at Grade 1 (Footloose). Turning to G major, Wild Mountain Thyme as featured above, like a lot of folk and country songs, uses chord IV (C major) frequently.

At Grade 1, we set up some 4 bar ‘sequences’ (or chord progressions) with chords I and V only, as block chords and as broken chords. Now that we also have chord IV at our disposal, many more possibilities are open to us. Let’s look at an example progression, I – IV – V – I, in this way: 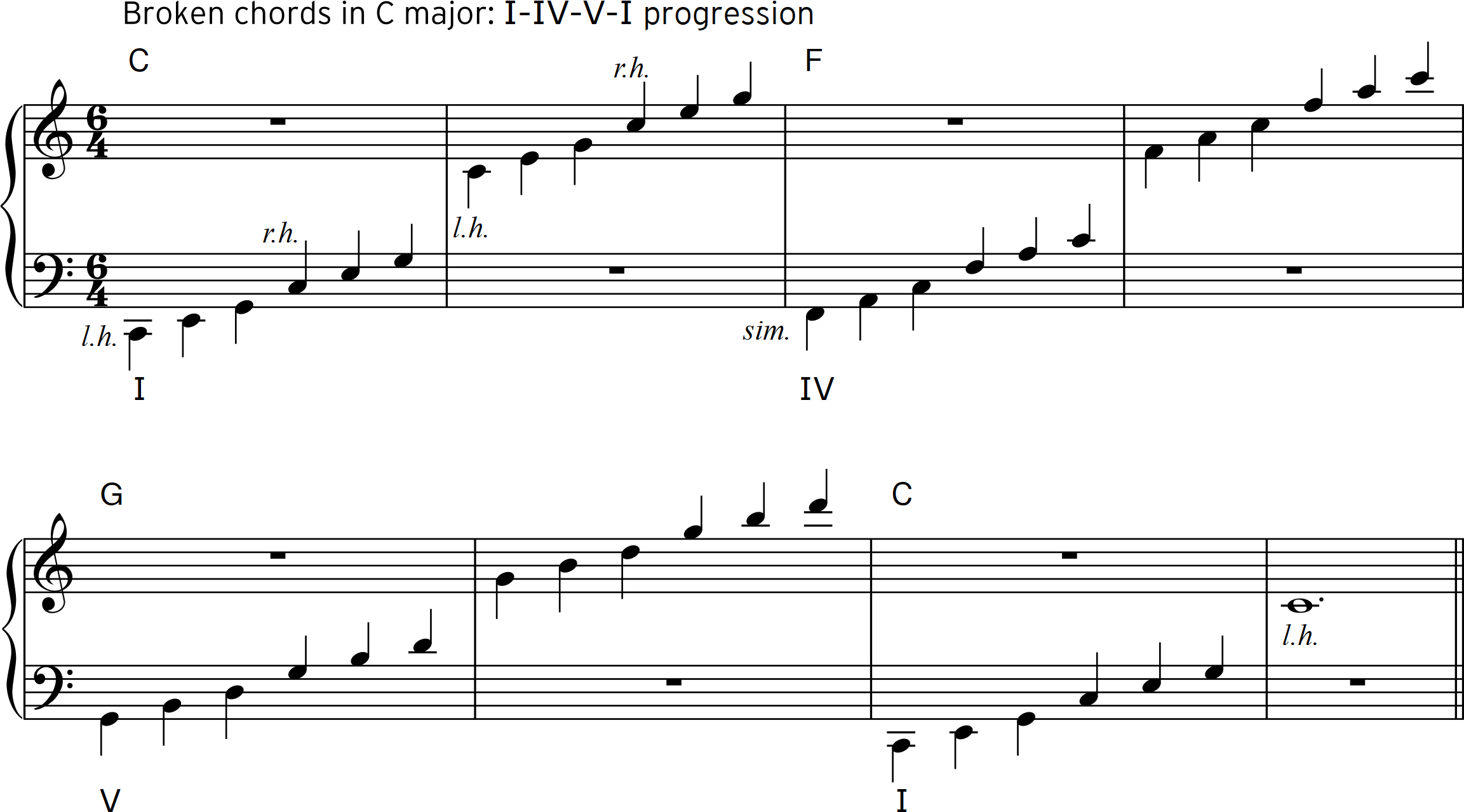 As with Grade 1, we will now invert the chords to make them easier to play, and you can explore improvising on top using the inverted pentatonic scale.

Here is an example, that uses the rhythm from the Country Waltz exercise:

More examples of this progression, in the keys encountered at Initial-Grade 2 can be found in the student handout.

There are many other sequences possible with chords I, IV and V, and you might like to explore further looping 4 bar progressions with chords I IV and V with your student. You'll find that chord IV feel like it can either go back to chord I or on to chord V — like it does in La Bamba for example.

An example of songs using chords I, IV and V exclusively is Arkansas Traveller (Grade 3), and the very well known Amazing Grace (Grade 5) can actually be played with just these three chords, although the Grade 5 arrangement includes some more complex chords. These three chords work incredibly well together, and can be used to harmonise many gospel songs, and countless other well-known songs such as Happy Birthday, Auld Lang Syne, If You’re Happy and You Know It, My Bonnie Lies Over the Ocean, She’ll Be Coming Round the Mountain, When the Saints Come Marching In and more.

One of the pieces at Initial, Rock to the Roll, is particularly interesting as it uses chords I, IV and V in a famous progression known as the 12-bar blues, a popular form in contemporary music: 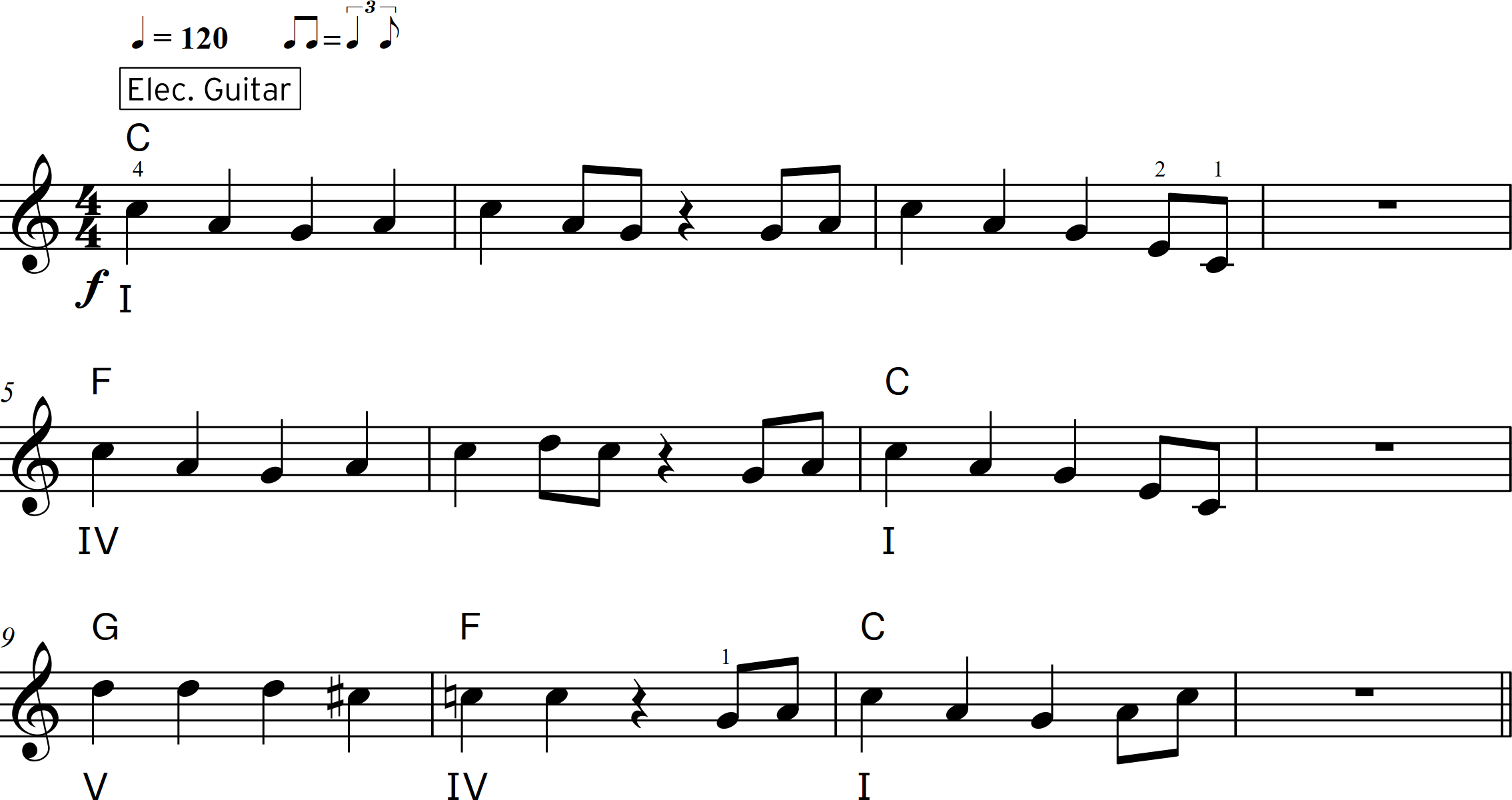 The student handout shows the 12 bar blues form in C, F and G.

The blues serve as the cornerstone of jazz repertoire – you’ll also meet blues scales in Scales & Chord Knowledge, if you’re doing that option for your technical work.

Grade 2 introduces two new keys for the keyboard exercise: F major and E minor. Can you work out what chords I, IV, V are in these keys? At Grade 1, we saw that many pieces end with the sequence V-I, and we see this in the new pieces at Grade 2, e.g. Sarabande ends with A-Dm, and Air ends with A-D.  What we learn now is that the preceding chord is often chord IV, giving us the sequence IV-V-I, which you’ll see in Charlie is my Darling, and you can even make this work in Arabesque by inserting the ‘missing’ chord V (E major) halfway through the second last bar – does it sound better to you? More on this can be found in the student handout.

In Grade 2, the keyboard exercise applies many of these new principles: chord IV is introduced, and the exercise ends with the sequence IV-V-I. The scale increases in span to two octaves. Here it is in F major:

You’ll notice as you study more pieces that chord changes tend to happen more frequently towards the end of a song – which is exactly what happens in this exercise. Sometimes you’ll hear this referred to as the ‘harmonic rhythm’ – for instance ‘the harmonic rhythm increases’ simply means ‘the chords are changing more quickly’. It’s quite different to the rhythm of the melody line – which as we can see is moving in quavers.

Looking at the keyboard exercise closely, you might see one chord that you did not recognise. Do you notice that towards the end of the exercise we have a new chord appear – V7 (pronounced ‘five-seven’?)

The V7 chord is a variant on the usual V chord. To understand how it is formed, let’s look at how we form chord V in C major. Play the root, then add the third, then the fifth, and finally the seventh.

The V7 chord adds more thickness and texture, and can be used in place of the usual V chord.

Again, it’s commonly inverted so it is easier to play against the C chord, in this case. You can leave out the 5th, making it easier still: 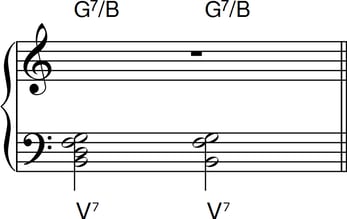 Here’s a simple example of ‘London Bridge is falling down’, where chord V7 has been used in bar 3. Compared with chord V, it feels less balanced, and almost ‘magnetically attracted’ back to chord I.

Chord V7 appears extensively in the Grade 2 repertoire, e.g. in Eine Kleine Nachtmusik – can you find any other pieces that use it? How about trying the 12-bar blues with some 7th chords?

In the final part of this series we’ll continue from Grade 3, where we meet the secondary chords vi and ii, and the famous 1950s progression. These chords are used not only in jazz harmony, but equally in classical music where they really help strengthen the key through the contrast of minor and major.

Elements of the Electronic Keyboard syllabus

Elements of the Electronic Keyboard syllabus