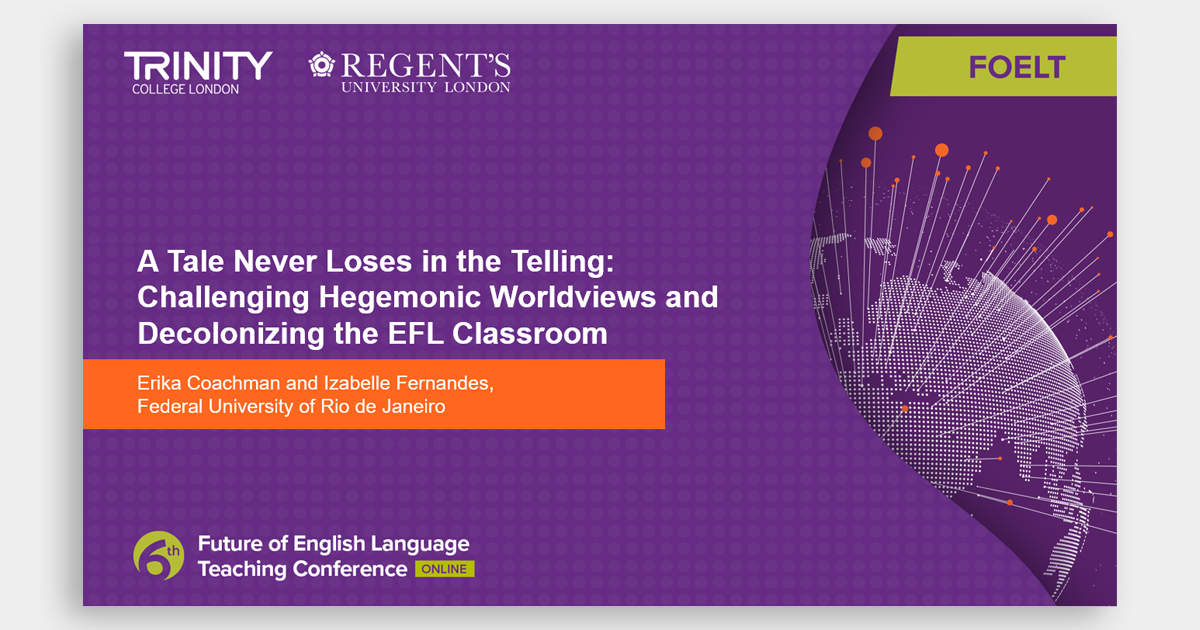 Erika de Freitas Coachman and Izabelle da Silva Fernandes of the Federal University of Rio de Janeiro presented on '"A tale never loses in the telling": Challenging hegemonic worldviews and decolonizing the EFL classroom' at the 6th annual Future of English Language Teaching Conference in June 2021.

There are political and historical reasons for teaching English as a Foreign language in a Latin American country. In the English classroom, it is important to unveil how this language has acquired such status. As Bakhtin (1997) argues, language shapes individuals but individuals also shape language – it is a two-way road. Therefore, both teachers and students have the potential to criticize, challenge and subvert dominant discourses existing in a given society. After all, language is a battlefield: it fosters discourses that reproduce the same old power relations but also contains attempts to transform our social structure (FAIRCLOUGH, 1992). For this reason, Critical Racial Literacy should be seen as vital in a language classroom, because it provides the reading tools we need to detect and respond to tensions in the racial hierarchies of our societies (TWINE; STEINBUGLER, 2006). In Brazil, racism is not limited to the socio-economic arena: the absence of black and Indigenous arts and literature in course syllabi is part of a compendium of exclusions that stigmatizes African and Indigenous heritages, undermines their participation in our societies and relegates these populations to the condition of second-class citizens. We have decided to play our role in the decolonial process by fostering diversity and turning the teaching of English as a Foreign Language into a decolonial practice, in which the voices and texts chosen include the cultural products of colonized populations. Thus, we are part of a Secondary School project named A Tale Never Loses in the Telling, which aims at spotlighting English versions of Native Brazilian legends and African folktales as an essential component of students’ reading experience.