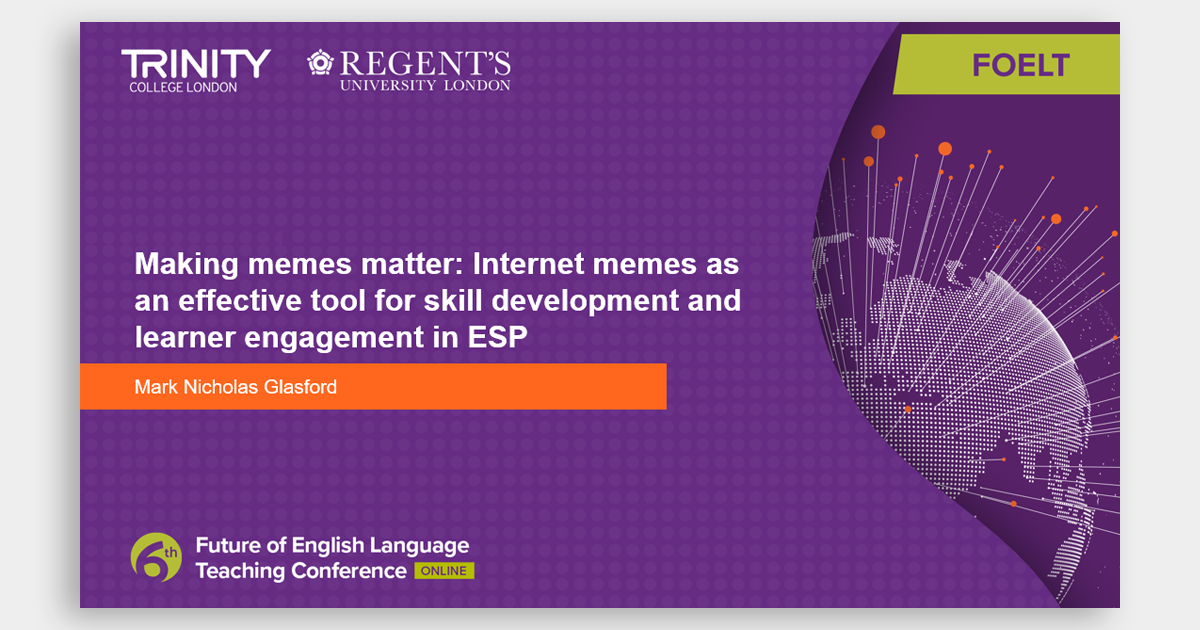 Mark Nicholas Glasford of the Department of English at St. Joseph's College in India presented on 'Making memes matter: Internet memes as an effective tool for skill development and learner engagement in ESP' at the 6th annual Future of English Language Teaching Conference in June 2021.

Visually and verbally succinct, memes have created a niche on the internet with a loyal user-base of adolescents who create, share and comment on them. This trend of humourous exchanges are not just the carrying-forward of jokes but is rather the sustenance of a cultural idea in an exclusive ethnic environment that caters to the insiders of said environment. Meme propagation has induced companies to include memes for their digital marketing to reach young consumers as memes are inclusive and instantaneously comprehensible. These factors have made meme-creating skills profitable. With memes having such commercial value, the push to bring them into the ESP classroom is evident. ESP classrooms despite the transcendence of the internet have maintained their focus on learners needs and have effectively adapted to the ongoing changes. Before getting to the outcome of meme inclusion, it would be important to note that to reach such stellar minimalism in language production, learners would have to go through an intensive process that involves them undergoing meticulous training in the target language. So through the journey of creation, discussion and drafting of memes, learners will be able to also hone their language skills. As most memes do not fit the criteria for marketing due to lack of sensitivity, this issue can be addressed in the classroom with the help of the instructor. This paper seeks to establish the need for meme creation in ESP classrooms for learners to have effective learning engagement along with a profitable skill at the end of the course.