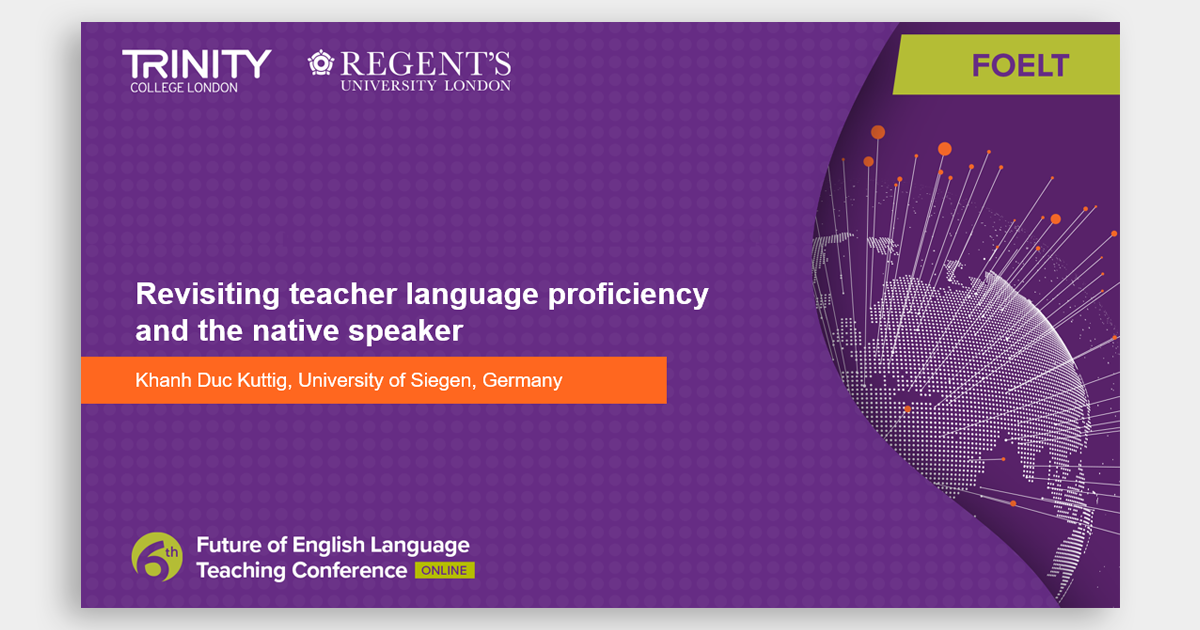 Khanh Duc Kuttig of the University of Siegen in Germany presented on 'Revisiting teacher language proficiency and the native speaker' at the Future of English Language Teaching Conference (FOELT) in June 2021.

The discussion surrounding the native speaker in ELT is not new. There appears to be an assumption that a teacher who is a native speaker of the language being taught has an advantage and in ELT, this is seen in job advertisements that seek ‘British or Irish passport holders only’ or in anecdotes from colleagues who tell us that schools have declined interviews with them because of where they come from or purely on the basis of their name not being John Smith. Freeman (2016: 182) describes this native-speakerism as the legacy in language teaching ‘of the valuing of “nativeness” as a criterion for being a “good” language teacher’. Yet all over the world, where English is being taught and learnt, the majority of the world’s English teachers will not be native speakers, but instead are proficient non-native speakers of English. Does proficiency in English make a person an effective teacher? Richards (2017) suggests that English teachers need to be proficient in both general English and classroom English. Yet, classroom English is seldom taught. TEFL qualifications and teacher education programs focus on subject-matter knowledge and methodology. This talk addresses the issue of classroom language skills and is divided into three parts. In the first part, we briefly review some of the research on language teacher proficiency before looking at classroom language skills (CLS) in the second part. We close with a discussion on how we can move away from native-speakerism through the inclusion of CLS in TEFL qualifications or teacher education programs. Creativity and Sustainable Goals
This session will look at how a creative approach to language teaching can support the development of student awareness of sustainable development goals, and encourage reflection on personal and collective efforts within their communities
REGISTER
Developing Critical Thinking in the ELT Classroom
This webinar will explore how classroom resources and activities can be adapted and extended to foster critical thinking skills in our students, enabling them to use English in a more meaningful way.
REGISTER
What can neuroscience offer to educators?
Understanding how the brain works can transform how we teach. This webinar will offer insightful ideas to help teachers boost students’ focus and alertness and improve memory.
REGISTER