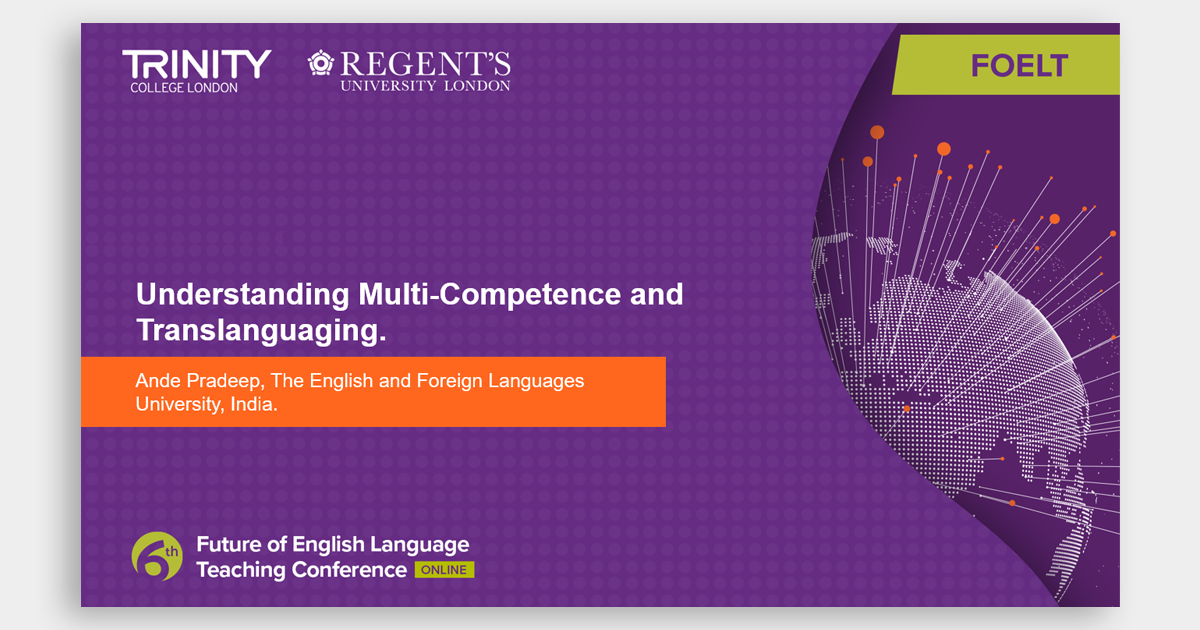 Ande Pradeep of The English and Foreign Languages University in India presented on 'Understanding multi-competence and translanguaging' at the annual Future of English Language Teaching Conference (FOELT) in June 2021.

While there have been a number of studies that recommend us to unsubscribe from Modularity of Mind (MOM) theory, according to which mind has those distinct modules that are developed for specific functions; recent research that happened in the area of Applied Linguistics gave a new understanding of how Second Language Acquisition (SLA) happens to a monolingual speaker. It also constructed new knowledge that allows us to analyse what Language is and how it co-exists with other cognitive and semiotic resources available in the human brain. This clearly means that all languages have a commonplace in the brain that is responsible for language production. since language and other cognitive resources are inseparable, language has to be seen and understood as a combination of both. The general understanding is that language is a faculty of the brain whose purpose is to communicate the intention or information as much as possible. In this process, translation of personal experience or feelings, using a language is always considered and felt 'half hearted', and this is where using different known languages are used simultaneously by bilinguals and multi-linguals. In simple terms, this is a process in which we tend to make meaning and shape our experience using language as a medium. This very idea of 'languaging' is often restricted to the use of languages only while it actually can be a combination of verbal, non-verbal, visual, auditory resources. This paper attempts to understand the idea of Translanguaging and how it is linked to the multiple competencies available by deviating from the traditional understanding of Language, Language Learner and Language learning.